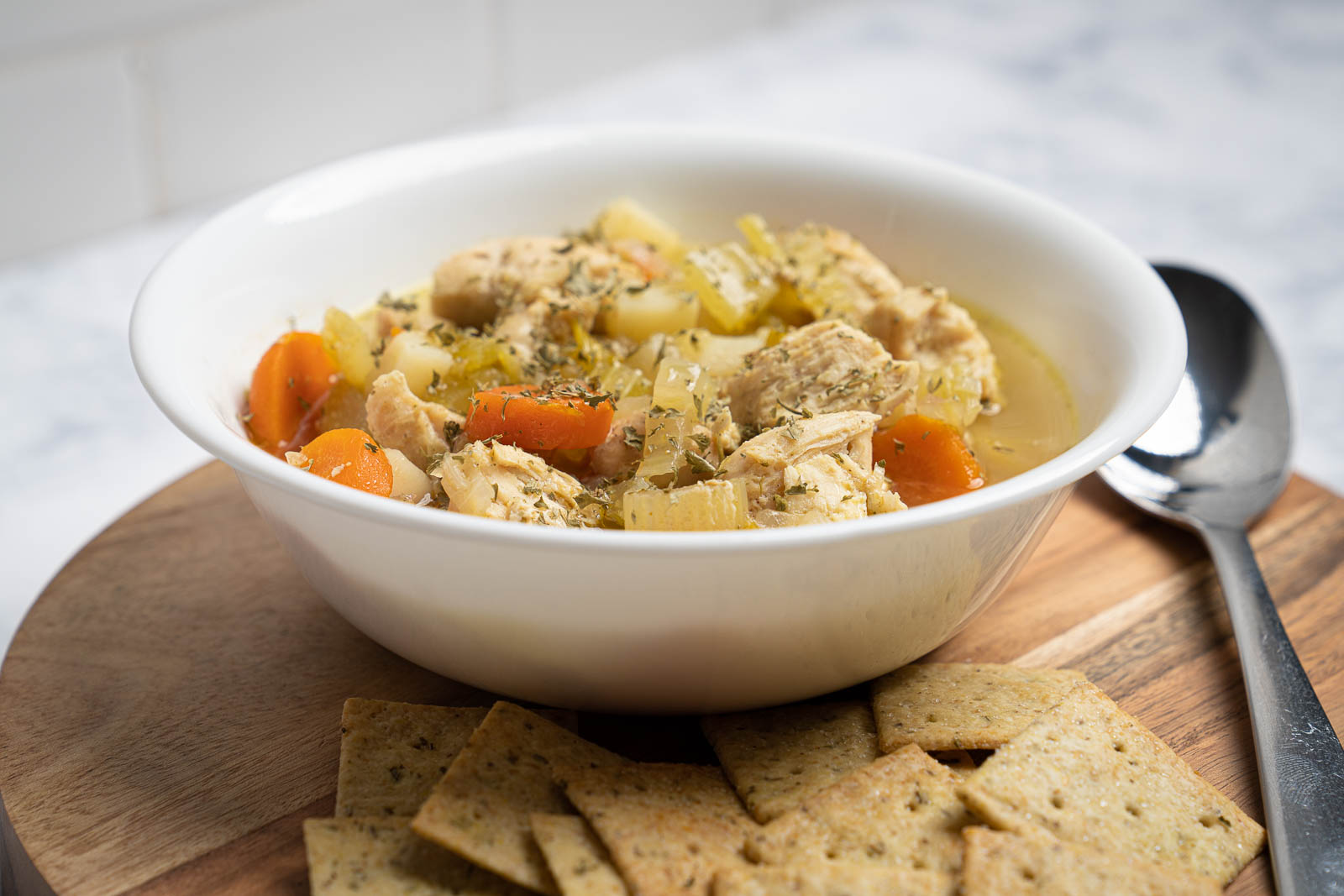 Chicken soup is arguably one of the most perfect foods out there. It’s been around forever, it’s easy to prepare, it’s nutritious, it has a lot of benefits. We even give it as a gift. It’s in the same league as chocolate chip cookies (or, cookie dough), chinese takeout, sushi, pizza, potatoes (in every form), and so many other comfort foods. On top of all of that, it can be low-carb, keto friendly, and gluten-free, fitting nearly every popular diet and nutrition lifestyle there is out there!

Chicken soup probably outdates a lot of them. As I mentioned, it’s been around nearly forever. I know, I know, I hear y’all saying “please quit with the hyperboles and all the crazy claims”. Not so fast. If you wanna get technical, we can do some research. Chicken soup has been around since the domestication of the fowl in Southeast Asia, back in the 1200s. Ancient Greeks had their own version of chicken broth and believed the soup to have healing properties. In Italy, beginning in the 1700s, people began feeding noodle soup to the sick because it was easy to digest. What we have today isn’t far from what we had back then – a soup made from chicken meat, bones, and various vegetables and spices.

The Soup with Superpowers

This was long before the advent of modern science and any real means to understand what was going on, but I dare say that our predecessors were onto something with the idea that chicken soup had some kind of superpowers.

Chicken noodle soup first became a thing as we know it today, way back in 1934, when Campbell’s soup company came out with “noodle with chicken soup”, thanks to then creator Ernest Lacoutiere, a chef at Campbell’s. It really didn’t catch on until five years later when a radio host accidentally got the word order mixed up and mistakenly referred to it as “chicken noodle soup”. That rolls off the tongue a whole lot smoother than “noodle with chicken soup”. People went crazy, thinking it was something new, and, well, the rest is history!

Chicken soup is, to me, the perfect amalgamation of all the right ingredients. A chance creation, you might say, given that its origins were in a time where we had no understanding of the benefits of things like collagen, protein, spices like garlic, ginger, and other things.

Make It Your Own

The recipe I share here is the one that my mother came up with. As I mentioned earlier, it’s low-carb, gluten-free, and keto friendly. The recipe itself is very versatile, because you can modify it in a number of different ways to change things up. I call what you see below the “chicken pot pie” version, however it can easily be made into chicken noodle either by adding egg noodles after you remove the chicken, or it can be kept keto / low-carb / gluten-free by using frozen butternut squash noodles.

It’s always been a hit, and I attribute the simplicity of the ingredients, the ease of preparation, and the secret ingredient – ginger – to it’s success. Some ingredients can be substituted, however the really key ingredients that I believe give this soup its signature flavor are the garlic and ginger, made by Gourmet Garden, the roasted chicken base by Better Than Bouillon, and the organic seasoned salt by Redmond.

Ready In Just An Hour

It’s simple. In fact, it’s so simple that if your sweetheart (who does all the cooking) calls midday to alert you that they never made it into work, that they’re home a little under the weather, you can be the savior, with little to no real effort, nor any talent required. Ten minutes at the grocery store. Chop some celery and an onion. Throw it in a pot with some butter. Squeeze some garlic and ginger out of a tube. Stir a bit, add some seasoning. Throw some frozen chicken on top, add some water, let it simmer, and you’re as good as done.

If you enjoy this recipe, be sure to share it using any of the buttons below! Simply reading and sharing these articles with your friends and family helps me to continue doing what I love; finding the very best and sharing it with you to live your best life! Interested in more low-carb, gluten-free, keto friendly recipes? Check out my others on the Eat section of my blog! If you are a Yummly user, click below to add this to your recipe box!

Chicken Soup with Garlic and Ginger

Ginger, the last thing you'd think of making its way into a smooth comfort food classic, is the gentle spark of warmth that rounds out this soup and takes it to the next level. Just as approachable as your mother's chicken soup, this chicken soup that my mother tested and refined is the best I've ever had, all thanks to the little details.
Course Soups
Cuisine American
Keyword carrot, celery, chicken, garlic, ginger, potatoes, soup
Prep Time 15 minutes
Cook Time 1 hour
Total Time 1 hour 15 minutes
Servings 8 servings

As an alternative to the carrots and potatoes, you can also use frozen butternut squash noodles for a lower-carb alternative to chicken noodle soup.  The garlic and ginger paste that I’m referring to in the recipe are a lifesaver for any cook. I use the Gourmet Garden brand; they come in a tube, usually refrigerated in the produce area, and I have gotten them usually at Kroger.  The seasoned salt I use is Redmond’s Organic Season Salt. Redmond’s makes some of the absolute best salt you can get, full of flavor, and this seasoned salt is no joke.  The bouillon stock base I prefer is Better Than Bouillon brand and they are available everywhere. It’s different than the normal bouillon cubes that you see, and much easier to use, as it’s already a thick paste that you just spoon out and add to your dish, however much or little that you want to use.